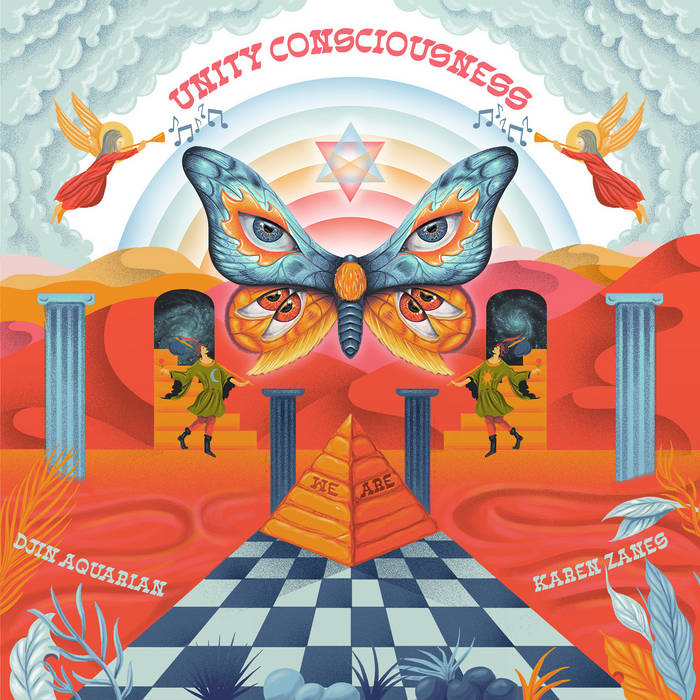 
From within the beginning that always has been and will be, centered in our shared Source Conscious Self, in the same manner we share a small portion of Earthly material, “As Above, So Below-As Within So Without”, and the same Universal Mind, comes forth this shared record of Unity Consciousness, featuring the angelic Karen Zanes and the Djin Aquarian with the Yahowha33 band of Berkeley California.

Making a divine springtime deposit into the Akashic Record Vaults, at the behest of Sascha Wehling commander and chief of Aumega Project, some of my new Berekley brothers of “Yahowha-land” and I united our efforts to bring forth the formless and Infinite into a digital cup, in the key of G#, known in the yogic traditions of sound healing, to correspond to our throat chakrah. Why the key tone of the throat chakra focus, because it houses the double-edged sword of Voice our ultimate human tool of creation or destruction now in desperate need of repair from over use and stress.

Open Source music allows Life to jump in and express the resonant sonic frequencies in our constitutional structure, relieving the stress and frustration of the harsh abusive, effects our Voices have been used for, disturbing the Balance of our constitution. “Sound forms-Light fills”. The quality of the Sound equals the quality of the Light through resonance.
I literally blew in from four months camping nomadically in the Arizona desert and laid these tracks down with Zap, Morgan, Ethan and John in the spirit of The Now, improvised sound alchemy and the same swift conveyance of chords and grooves before tracking, in the same manner as Savage Sons of Yahowha was long ago…Keep it hangin’ loosely but groovin’ friends…We’ve got a long row to hoe for peace, justice and Unity Consciousness.
And here's a word from co-producer, brother Zap Aquarian.
May the Source Be With You
Djin
Mount Shasta, 5-12-2022

I was introduced to Djin in 2017 by my partner Sara (aka Stream Aquarian) without knowing who he was. Djin, Sara and I hung out in Mt. Shasta where he had a practice space set up in a pole barn with a nice drum set. Historically I am a guitarist, but I had taken a few recent drum lessons. Sara suggested that I get behind the kit, and within the first few seconds I could tell the jam was not going well. I slowed way down, closed my eyes, and said a very desperate prayer. After that I started building on a beat that I had stolen from the song "Jason and the Argonauts" by XTC and it was all psychedelic gravy from there. After the jam was winding down I put my sticks back and looked up to a smiling Djin who enthusiastically exclaimed "You're THERE!." We have been friends ever since and I am honored to have had the opportunity to lend my limited production abilities to this effort that we dreamed up years later. I had been assembling what seemed like a disjointed set of gear at my house; Djin's album was the first time I truly put it all to use at once. A serious blessing for us both with hopefully many more to come.
Zap Aquarian

"In the summer of 2021 I had been invited by Sascha Wehling of Aumega Project (Germany) to write some songs for a split EP with Djin Aquarian (Yahowha 13, King Arthur's Court), who is a fellow artist on that label.
Of course I was excited to participate in this collaboration!
I had recently bought a "Tiffany" inspired stained glass light bulb to put in a mid century modern lamp. When I turned it on, it flooded the wall with its multiple colors. I said out loud "That's my magic light!" So that became the title for the first song. I plugged in some existential thoughts that had been running through my mind at the time and that's how the song was written.
"Floating on a Cloud" is an acoustic guitar instrumental with flourishes of electric guitar swells produced with a chrome slide.
"Fiery Leaves" was inspired by a solo leaf peeping trip to Maine in the fall of 2021, and is evocative of the feeling of serenity it instilled in me."
Karen Z.