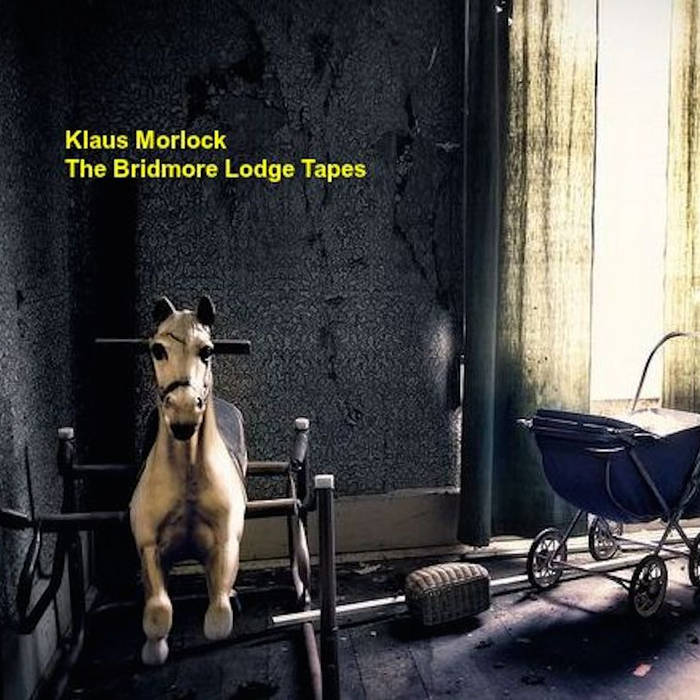 
"...an incredible musical tale, an album so unlike anything else in its intensity and creativity that it gets under your skin and raises the hairs on your arms and neck. You must hear this album, but not alone and not with the lights off..."

"...this is both one of the most affecting and unusual albums you will ever hear."

Of late, a number of mysterious and cobwebbed artifacts have emerged from the shadows and crypt of lost film reels and accompanying soundtracks. And now here is something equally unusual, strange and rare; "The Bridmore Lodge Tapes".

The Tapes are a much talked about but rare and often thought lost musical venture by English born German composer Klaus Morlock, primarily known at the time for his electronic based compositions and soundtracks for various 1970s European horror movies. A known occultist, Morlock recorded his opus in the abandoned residence of the title where it was said that a horrific series of events led to the previous occupants’ child dying in a mysterious and unexplained manner. Curiously this event seems to have bled through into the titles of the pieces on the album; Morlock’s supposed solitude during the recording undoubtedly also influencing this strange and unsettling album. Recorded between 1976 and 1977 on instruments allegedly loaned to him by Jimmy Page, this is both one of the most affecting and unusual albums you will ever hear.

"Wake" opens the album, electronic breaths reverberating and echoing over a tense vibrating rhythm as single icy notes are plucked from the darkness. At once instantly melodic yet hugely disquieting it sounds like the analogue creation of an especially demented and possessed Jean Michel Jarre digesting the back catalogue of the BBC Radiophonic Workshop. It is also completely transfixing and utterly brilliant. "Watching The Girl from the Village" is more sinister yet, whirrs and keyboard squelches adding menace to the steady and stalking harmony. The track descends into bursts of disturbing synth screams and noise, human breathing this time around providing an urgent and unquiet rhythm, before returning to the quiet hypnotizing central melody. "Her Dark Magick" is a melancholy and yearning piece of electronic flute with reverbed strings and is utterly beautiful in its vintage orchestration. There was clearly something altogether lonely and melancholic within Morlock during the making of this piece; this sense pervades the album just as much as the more disturbing and sinister elements, adding hidden depths and layers to the compositions. Similarly "Nocturne for Judy" is a solo piano piece of unease and emptiness, a dusty and forgotten sense of sadness lurking around the dimming glow of rural twilight. There is an atmosphere of folk horror inherent here, of a rustic and autumnal solitude where, despite the gentle hues and silence, there is a whispering wind rustling through the trees telling us we are not alone. "Please Reveal Yourself" is a classic piece of seventies electronica, and one which future hauntological enthusiasts such as Ghost Box, Belbury Poly and The Moonwiring Club would seek to emulate. Shimmering keyboard appregios provide a steady base from which doom-laden,ominous strings sing out; an orchestra from hell perhaps but a powerful and stirring one nonetheless. "This Was Judy's Room" is a haunting and ghost filled elegy, electronic piccato strings picking out the song’s refrain over treated and synthesised guitar. Reminiscent of classic 1970s horror soundtracks such as "Lets Scare Jessica to Death", it is a captivating and chilling piece. "Night Sweat" introduces disembodied electronic free form jazz percussion and time signatures to the atmospherics, echoing keyboard wails and hums reminding this listener of the soundtrack music to such apocalyptic classic as "The Quatermass Conclusion" or Terry Nation's "Survivors". "Untitled Fragment"s choral melody (or malady) adds a sacred and hymnal feel to the hypnotic beat, a spooked out Popol Vuh. Morlock may have been unhinged by the forces around him, or simply his own descent into solitude and madness whilst recording, but he never lost his keen sense of melody that is both affecting and altogether human. This is electronic music but with a scared and pulsating beating human heart. "The Toy Carousel" is a twisted, otherworldly and nauseous fairground ride; a "Carnival of Souls" indeed. It is also spellbindingly beautiful. "The Sick Child" by turn is a plaintive and mellotron filled, ominous warning of a track; the tension is palpable and the descending piano notes bone chilling in their cold and glistening beauty. An off key music box melody ends the song, merging into squalls of electronic noise; a suggestion of madness and malevolence. "The Derelict Nursery" returns to the piano led melancholy of earlier in the album but with a sense of urgency.
The sounds which Morlock was unleashing from his array of vintage keyboards and equipment are astonishing; from the quietest and most sensitive elements such as the track in question to the air raid wail of electrified wind in "The Unmarked Grave" he is an expert musical storyteller. We see these songs as much as hear them; they conjure up images and back stories just as much as provide a soundscape. Indeed in some cases, this is achieved to a chilling, almost uncomfortable yet masterful extent. "The Unmarked Grave" ends on a backwards loop, the album closer "The Child Garden" echoing with a child's voice and a creeping, rasping hum before harpsichord and orchestrated woodwind emerge; it is a shiver down your spine moment. If Kraftwerk composed horror movie soundtracks it may well have sounded a little like this.
Morlock now appears to have completely disappeared. No-one now knows where he is or what his recollections of this unique recording are. All that is left is his incredible musical tale, an album so unlike anything else in its intensity and creativity that it gets under your skin and raises the hairs on your arms and neck. You must hear this album, but not alone and not with the lights off....
Reviewed by Grey Malkin
— The Active Listener
active-listener.blogspot.co.nz/2014/09/album-review-klaus-morlock-bridmore.html