by The Happy Hour Band 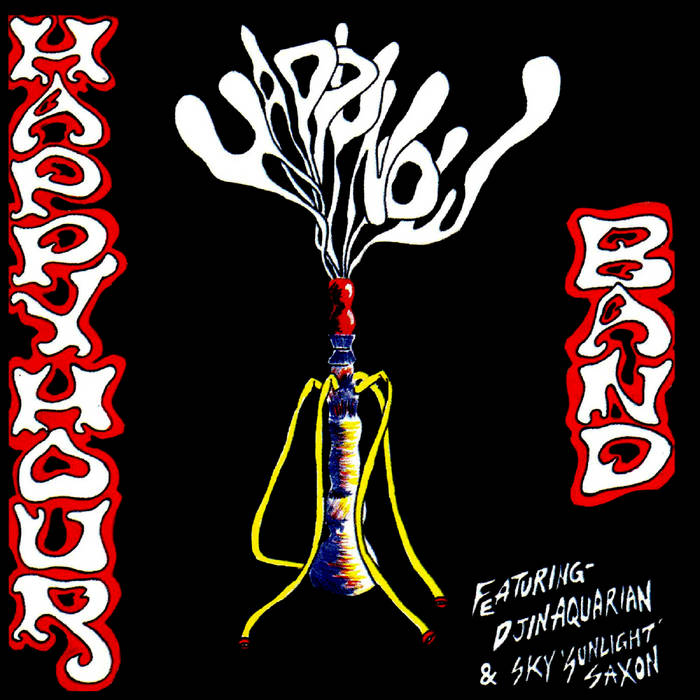 
Sky Saxon (The Seeds, King Arthur´s Court, a.m.) reunited, musically, with Source Family member Djin Aquarian (Yahowha 13, Yahowha 33, a.m.) in a project they called the Happy Hour Band, who released the album "Happy Now" in 2003.
The six tracks were evidently recorded in late 1999 and throughout 2000.

The CD version of this album was apparently printed in limited quantities — 500 copies.

The music is not unlike the Yodship music recorded in the early 1970s, but with a more conventional musical backing and some pre-written lyrics here and there.
Djin actually shares lead vocals with Sky more on this album.
The lengthier tracks include “Dog’s Cruisin’ / Wild Child”, “City Pity”, “Let’s Be Lovers / YHVH All”, and the magnificent “In The Cradle Of Love / Freeway”, which climbs to great heights and closes the album.
The other tracks are the Djin-sung “Venus Here We Come” and a riotous run-through of “Silent Night”, complete with toasty good vibes and jingling sleigh bells. Lyrically, as can be gleaned from the song titles alone, themes on Happy Now range from the usual Sky Saxon-esque subjects: dogs and other animals, travel to Venus, and YaHoWha.

Sky Saxon’s activity during much of the late 1990s and early 2000s is largely mysterious, as his level of musical output fell temporarily. But Happy Now, recorded during just that time, shows that he was as able and willing as ever to do his classic, beautiful thing. And his musical and cosmic connections with Djin Aquarian remained as tight as ever.


You’re going to be hearing a great deal about the Aumega Project from me going forward. The German label has a vast digital catalogue of obscure and otherworldly psychedelic reissues and new titles.
This is one of their most recent—and most striking—releases. The Happy Hour Band was a reunion of Sky Saxon and Djin Aquarian, both from Ya Ho Wha 13. Saxon, who was also the lead singer of The Seeds, steers this intense group through meandering freak outs and harsh ramshackle jams.
Even though the audience in these recordings sounds very small and casual, the music here is insanely eccentric and straight-up ferocious. As a whole, the band sounds deeply inspired by the Damo Suzuki-lead Can, but at other times, elements of Gong and of course the Source Family shine through. On the closing “In The Cradle of Love/Freeway,” the group gets closer to a live Velvet Underground vibe as anybody could have at the time (1999/2000). The grungy lo-fi sound quality of this album only cements the live Velvets comparison further. White heat indeed.
recordcratesunited.com